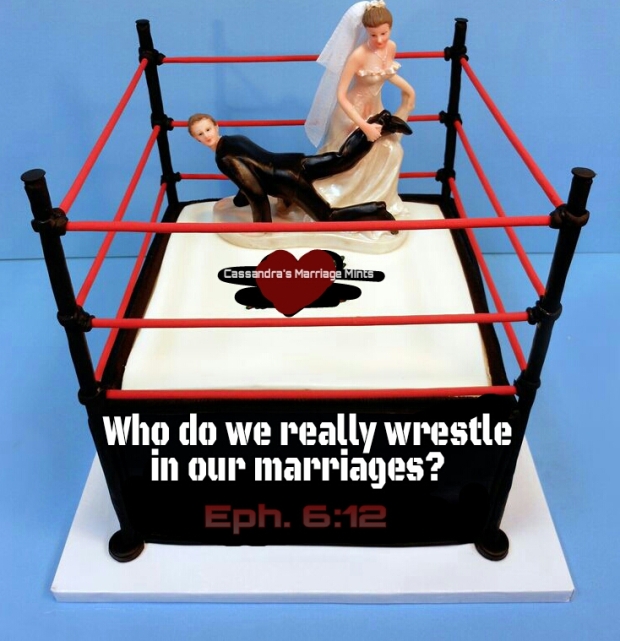 Ephesians 6:12, KJV, ” For we wrestle not against flesh and blood, but against principalities, against powers, against the rulers of the darkness of this world, against spiritual wickedness in high places.”
Do you feel like you’re in a wrestling match with your spouse? Do you resemble two wrestlers circling one another as opponents instead of teammates? Someone ring the bell! No, don’t tap out! There’s no one else you need to bring into the ring! Take a break; sit in your corner and realize that you need a drink of living water–God’s Word. When we read Ephesians 6:12, God clearly points out to us who our true opponent is. The fact that God distinguishes that we do not actually wrestle against”flesh and blood” but against the evil enemy and his demons is an important revelation. God reveals in this verse that the enemy will make it seem as if we are wrestling against our spouses and other people, when, in fact, it is not truly a physical battle. It is a spiritual battle against wicked spiritual beings.
The wife who is wrestling against her husband who is addicted to pornography, drugs, alcohol, or gambling does not need to wrestle against her husband. The husband who is wrestling against his wife who is caught in adultery does not need to go against her as an opponent. Our spouses are not our enemies! The devil and his wicked angels are our enemies.  Praise God! We can take heart that we are not left alone in the ring! God has already won the most important battle of them all when Jesus conquered death and the enemy on the cross.
Just like the televised “WW_”matches and professional wrestlers, the tactics and victories of the enemy are fake! They are rehearsed tactics that the enemy has practiced on other people and replayed over and over to try to tear marriages apart. We have to recognize our true enemy and declare victory in Christ because Jesus has already defeated him! Don’t let the enemy fool you into believing his victories are real. Jesus holds the Heavenly~Weight Title of VICTORY! Lord and Savior Jesus♥ Colossians 2:15, KJV, ” And having spoiled principalities and powers, he made a shew of them openly, triumphing over them in it.” Take another look at the Message version and there is no doubt as to why you and your spouse working together can walk in victory: ” All sins forgiven, the slate wiped clean, that old arrest warrant canceled and nailed to Christ’s cross. He stripped all the spiritual tyrants in the universe of their sham authority at the Cross and marched them naked through the streets.”
Let’s revisit Ephesians 6:12 the Message version, which says: ” 10-12 And that about wraps it up. God is strong, and he wants you strong. So take everything the Master has set out for you, well-made weapons of the best materials. And put them to use so you will be able to stand up to everything the Devil throws your way. This is no afternoon athletic contest that we’ll walk away from and forget about in a couple of hours. This is for keeps, a life-or-death fight to the finish against the Devil and all his angels.”
Your marriage is not a “’til death do we part” fight against your husband or wife. Your marriage is a match endorsed by Almighty God in Heaven
and He has already conquered the enemy! Thank You Jesus! Husbands and wives are in a fight to the finish to withstand the enemy’s wiles and temptations as a team not as competitors. Instead of seeking the winning verbal slam to knockout your spouse, join hands and pray together. Join forces against the subtle tactics the enemy employs that pit you against each other. Recognize that your marriage “is for keeps” and that you and your spouse work together on the side of the winning team against the real enemy who would like nothing better than to see you pinned down and pitted against one another. That is the defeat he is after–husband and wife in opposite corners. Don’t concede defeat. If your partner is not too keen on being a team player, remember your personal trainer Jesus has your back! Only two need to agree♥ My prayer for you is that your spouse will touch together with you and come into agreement that nothing and no one will come between you. God bless
Matthew 18:19 ” Again I say unto you, That if two of you shall agree on earth as touching any thing that they shall ask, it shall be done for them of my Father which is in heaven.”
~Cassandra Salamone. All rights reserved.

3 thoughts on “Who Do We Really Wrestle in Our Marriages?”